Grits. . . does not only stand for Girls raised in the south, but I think it also is an acronym for Great, really intensely terrific side dish!  In the last several years, I have come to really love them!  I’ve posted about cheese grits, but friends, I’ve found a recipe that just may top the cheesy version!  I found a recipe on Pioneer Woman (super site…check it out!), then I did a little tweaking of the recipe to make it less fattening.  We didn’t miss any of the other ingredients.  My husband’s words were, “You knocked it out of the park with that, one, Baby!”  I love it when he says that – it means he really  likes it!  If you’re tired of potatoes as a side dish, then try this!

As the main dish, I also tried Pioneer woman’s Pork Chops with Apples.  Mmmmmm. So yummy!

My Menu:
Pork Chops with Apples
Creamy Grits with Bacon
Green Beans
Fresh Tomatoes and Cottage Cheese
Here are some pics of the chops: 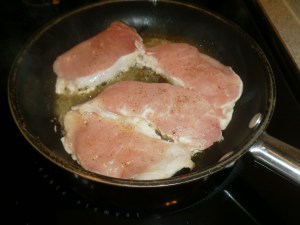 My “tweaked” recipe for the grits was this, instead of using bacon fat, I did the bacon in the microwave and sauteed the onions in reduced-fat butter.  I used 2% milk instead of heavy cream and I found that the grits were so good it didn’t need the cheese!  Pioneer woman would die if she saw my version of her heavenly dish, but the reality is I don’t live on a ranch where I rope cattle and burn off all those calories!  Something has to give, folks!  =)  I’m telling you, they were great even with these changes!

You can’t get a better salad than this…

Fresh tomato slices, on a lettuce leaf, and a spoon of cottage cheese on top.  It’s pretty and delicious! 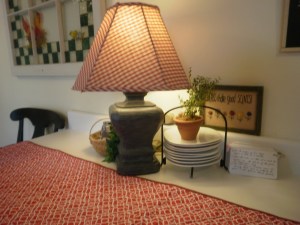 See my pretty quilted runner I just got?  It’s Waverly and I nabbed it at TJ Maxx for $7!  It goes the entire length of my bar counter adding softness, texture and color to that otherwise cold space.  ~Love~
So, what’s been cooking at your house?
From my parsonage kitchen,

3 thoughts on “What’s Cookin’ in the Parsonage?”