Alone?  They had each other!  Why would they feel alone?  Because during this time of emotional heartbreak, while each of their emotions were so raw, instead of pulling together, and talking and praying as a couple, they were isolating themselves and pulling away like opposing teams in a game of tug of war.  They became critical of the other’s response to the situation.  They bickered over little decisions they had to make regarding the baby.  They spent all their waking hours with the child, only somehow saving enough energy to make it back home for a few hours of sleep before returning to the NICU to start another day just like the previous one.  They wondered if their marriage would still be secure when their daughter was ready to be discharged.

The previous description is about no one I know; I made up the people and scenario.  But the fact is, this kind of thing happens to marriages all the time!  Hard things step into our lives, and, if we’re not careful, a death, a child’s rebellion, a financial set-back, a terminal illness, or any host of crisis’ can step in and destroy a home at a time when the couple needs one other the most!

During my mother-in-law’s illness a few years ago, we saw how the fatigue and separation, with one staying at the hospital and one sleeping at home, could wear on our emotions and our relationship.  There were a couple instances that wouldn’t have normally been so sensitive, but because of the weariness and stress, they seemed much bigger.  Since we knew this could be a long ordeal, we were, with the Lord’s help, trying to stay sensitive to the need to stay tender, current and in touch with the Lord and one another as we went through this journey.

Near 10-11 PM one night, we had a “date” in the hospital cafeteria.  All I wanted was dry Honey Nut Cheerios (my night time snack at home!), but it wasn’t about the food, it was about staying in touch with one another.  So much happened in a day, we needed time to talk, to catch up on, not only my mother-in-law’s condition, but also one another.

We had many offers from people who were willing to come and sit at the hospital so we can get out for a bit.  We planned dates during those days!  We had to remind ourselves of God’s sovereignty to care for things without our help.  She would be fine, and so would we. 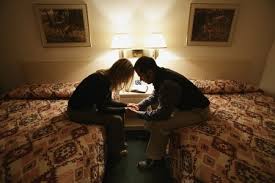 Every marriage goes through many times like I’ve described. Here are some other tips to survive stressful times:

Cleave to him. Love him unconditionally…for the health of your marriage. It’s the only way you’ll be discharged from the Marriage intensive care unit!